“Defamation,” you must have heard this term numerous times in the news or on social media, as Johnny Depp and Amber Heard’s case recently made many headlines.

But what exactly is defamation, and why is it a cause of concern for the celebs? Defamation lawsuits pursued by celebrities like Johnny Depp against Amber Heard and Blac Chyna against the members of the Kardashian-Jenner family can have a lasting reputational impact on the people involved directly and associated with the accused or the plaintiff in the case.

The term “defamation” is well-heard but not well-known; therefore, to enlighten you about this most-used term in celeb cases, we are here with this detailed article.

From what defamation law is to the types of defamations you can file a lawsuit for, the article has everything you need to know. 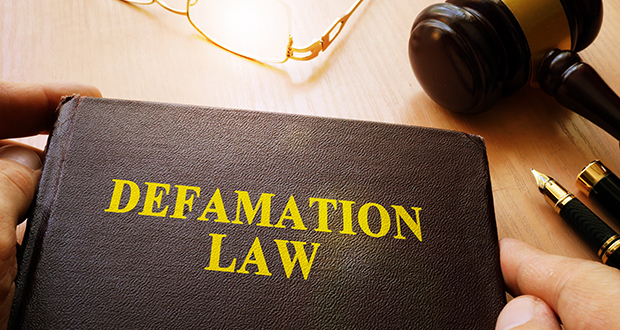 “Defamation refers to any deliberate false statement, either spoken or written, which can harm any person or a group’s reputation or affects their respect, confidence or regard or induces disparaging remarks against the said person.”

A statement that is merely someone’s opinion or thinking is not defamatory unless it is presented as a fact. An excellent example of a non-defamatory statement is “Smith Wales seems to be a crooked politician.” According to the court of law, this statement shows someone’s opinion and is not considered solid ground to file a defamation case against someone.

On the other hand, if someone says, “Smith Wales is a crook,” it clearly states that they are presenting a fact, which will be considered defamation, provided it is a false statement.

The Thin Line Between Defamation and Opinion

There is not a significant but essential difference between defamation and opinion. The reason why news and media houses use the word “allegedly” is because they do not want to defame someone or don’t want to invite legal lawsuits from celebrities and other famous figures.

A crucial part of a defamation case is that the person or a group of people, including a media house or news company, makes a false statement with a certain intent.

Whether the false statement is made with knowledge or without intent, it can be considered defamation. Private citizens can also file a defamation lawsuit if someone makes false statements about them, damaging their respect or career.

Some states in the U.S have laws that automatically make a certain kind of statement defamation.

There is just a thin line between opinion and defamation. A legal attorney is the best person to talk to know more if someone has defamed you. Call us today at 866-392-0381, and our experienced attorneys will help you file a defamation lawsuit using solid grounds.

What are the Types of Defamation?

As per the court of law, you can file a lawsuit for two types of defamation these include slander and libel. With either libel or slander, a person affected by someone’s verbal or written statement should be able to prove these four elements to win the claim in court:

What is Slander or Spoken Defamation?

Slander is a crime or action of making a false, spoken statement against the plaintiff that damages their reputation.

“Not very recent, but a very popular case of slander was won by David Schwimmer. The famous TV actor filed a slander lawsuit against Aaron Tonken (a former Hollywood fundraiser), who falsely claimed that Schwimmer demanded two Rolex watches as a payment for his attendance or presence at a particular charity affair”.

Any statement spoken publicly or in front of a third-party defaming the plaintiff is considered slander, and the court of law allows the plaintiff to file a case against the person who has made the derogatory statement.

What is Libel or Written Defamation?

Libel refers to making defamatory statements against someone in a written form. For example, false news or a statement written in a magazine defaming the plaintiff can be considered a libel lawsuit.

“In 2011, David Beckham filed a libel lawsuit against In Touch magazine. The defamation claims were filed because the magazine printed a story that David had cheated on his wife with a prostitute, said Beckham in a statement (source). However, the case was dismissed by a US Federal judge in Los Angeles”.

Slander Vs. Libel: A Comparison Chart 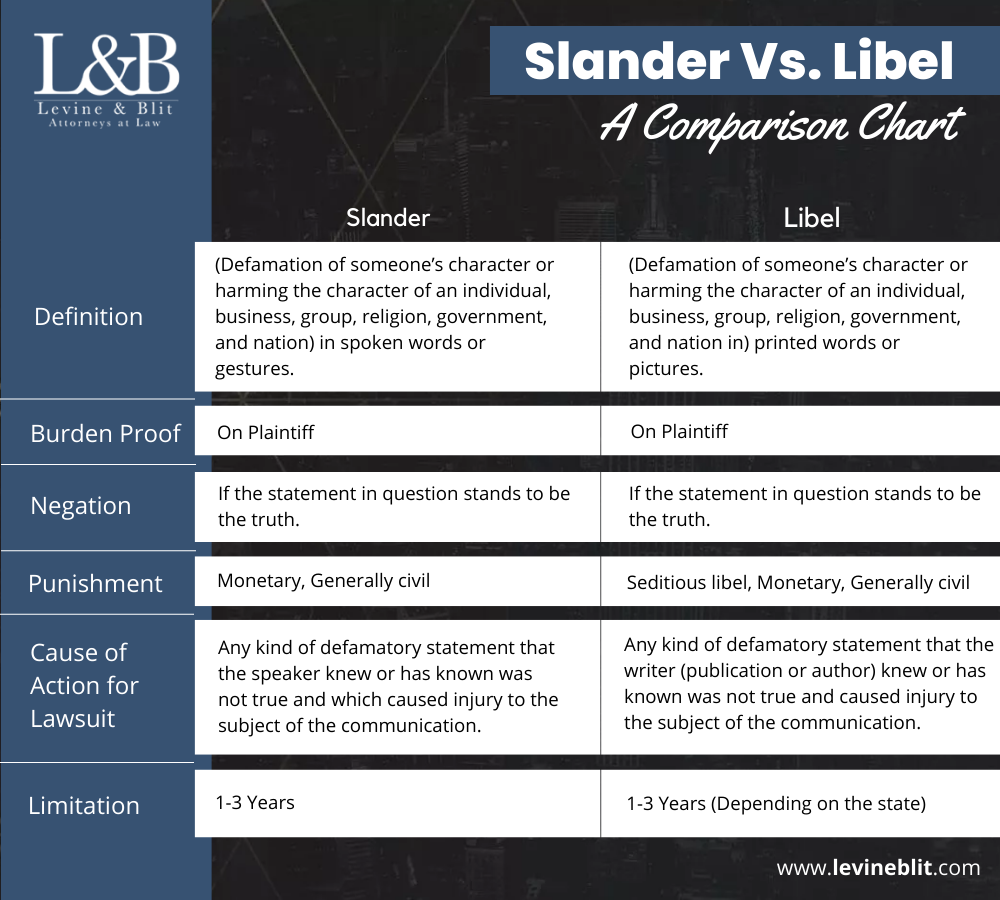 The Process of a Defamation Case: From Trial to Closing Statements

If you cannot settle the defamation claim out of court and have decided to file a lawsuit against someone, it’s essential to know how the entire process works.

Defamation can form the basis of a civil court, which means you or the affected person, known as the plaintiff, can sue someone over a defamatory statement to recover compensation for the damages.

A jury is selected from a group of jurors at the beginning of the trial. De-selected jurors choose a jury of the panel, generally through the challenges. Both sides, including the plaintiff and the defendant, have a few or many challenges determined by the jurisdiction’s civil court’s rules.

You or any party involved in the case has the right to challenge a juror. However, the challenge can be on any grounds aside from discriminatory bases, such as gender or race.

After the jury selection, the trial commences with the opening statement. Then, the plaintiff of the person affected being defamed gets the first opportunity to give a complete overview of their case, including explaining the burden of proof and how the evidence will demonstrate that the defendant has defamed their client.

Next, the defendant gets the opportunity to provide an overview of their version of the event. Neither party can make any conclusory arguments during this phase. Finally, the lawyers and both parties can participate in this case, explaining their side.

The testimonial phase begins after the court has heard the opening statements. The witnesses (expert and lay) are called upon during this phase. They are required to testify the comments and are shown the evidence presented by the lawyers of both parties.

The plaintiff gets the first opportunity to call a witness to conduct a direct examination. Next, the defendant receives the same opportunity, and they have a legal right to cross-examine the people presented as witnesses.

Leading questions are allowed in cross-examination, unlike direct examination. Once the side defending the accused is done with cross-examining the witness, the plaintiff can redirect the witness.

After the plaintiff has presented all their witnesses related to the case, they can “rest” their case. Next, a similar opportunity is given to the defendant side of the case by calling and examining all witnesses.

Once the jury has seen or heard all the evidence, the witnesses are asked to be present in the court, and lawyers of both sides summarize their arguments. Depending on the jurisdiction, the closing arguments can be ordered in the reverse order of the opening statements.

Why Do Celebrities Use Defamation as an Action of Conflict?

While everyone has the right to file a defamation case against anyone if it meets the legal criteria set by the court of law, the term is pretty common among celebrities. Most see it as an act of conflict.

The reasons for filing a defamation suit against someone can be many, including clearing the rumors spread by someone or wrongful accusation, getting monetary compensation for tarnishing the plaintiff’s image or character, and much more.

Most celebrities and people with colossal popularity consider their image their “brand,” Therefore, they feel it should be protected at any cost. However, a harmed image can lead to or cause damage to the future events the plaintiff might be participating in or their source of income.

Of course, celebrities’ lives are highly public in most cases, and minor details related to them can easily be scrutinized by the newspapers, magazines, or TV.

However, that does not mean every statement or article made by someone will result in a defamation lawsuit. A legal attorney is the best contact to know if you can file a defamation lawsuit against someone. Contact our expert lawyer at Levine & Blit to learn more.

How is Defamation Proven in Court? The Type of Evidence You Need to Prove Actual Malice

You must back up your claims using the right evidence to prove the defamation case. There are several types of evidence that the court can consider for the final judgment of the trial. These include:

It includes the evidence that supports the disputed fact without any intervening interference. For example, a witness testifying that they’ve heard the defamatory statement can be considered direct evidence.

This type of evidence consists of a series of facts that, if proven, or indirectly prove another fact. For example, if the defendant is the author or the owner of a website that has published a defamatory statement, either libel or slander against the plaintiff.

What Do You Have to Prove Defamation?

Before filing a lawsuit, you need to understand the difference between a statement having the potential to cause you harm and a statement that has caused you harm.

To win the claim, you need to prove that the released statement has caused a loss to you or has ruined your reputation, which is mostly the case with celebrities.

If you are the only one who knows the statement against you is a lie, it does not count as libel or slander unless there is a threat to release false statements against you, which will also count as blackmail.

When someone makes slanderous or libelous statements against a person in public that they think are harming their reputation, that person can gather all evidence with the help of an attorney and present it in court after filing a lawsuit to prove the released statements are not factual and to win the case.

Our lawyers have worked with many celebrities and have helped them win claims with our knowledge and experience in handling such cases.

Please don’t wait; give us a call at 866-392-0547 and get your case evaluated today by the experts in defamation cases.

Personal Injuries Over the Christmas Period – Who to Call!

The Christmas holiday season provides some of the fondest memories of the year. You get plenty of time to celebrate it with the people you love. ...

Why Christmas is the Busiest Time of Year for Attorneys!

Many people think that attorneys take it more accessible over the Christmas break. In reality, things are quite different. The Christmas season i...